As reported in the Illustrated London News, as well as The Lancet, Rahere Lodge was consecrated in the Great Hall of St Bartholomew’s Hospital, London, on 29th June, 1895. At 5 o’clock the Lodge was opened, with the Grand Secretary, Bro E. Letchworth in the chair. Thereafter, HRH Prince Edward, Prince of Wales, arrived with Crown Prince Frederick of Denmark, who was Grand Master of the Freemasons of his own country. The Earl of Lathom, Pro Grand Master, was consecrating officer and afterwards took the chair. He was supported by the Prince of Wales and the Crown Prince. The Senior Warden's chair was occupied by Lord Roberts of Kandahar (then Grand Senior Warden), Lord Skelmersdale (the Pro Grand Master's son) taking the Junior Warden's chair. The Director of Ceremonies was Bro Frank Richardson and the Dean of Gloucester (then Grand Chaplain) acted as Chaplain. Bro PH Waterlow, Past Grand Deacon acted as Inner Guard. 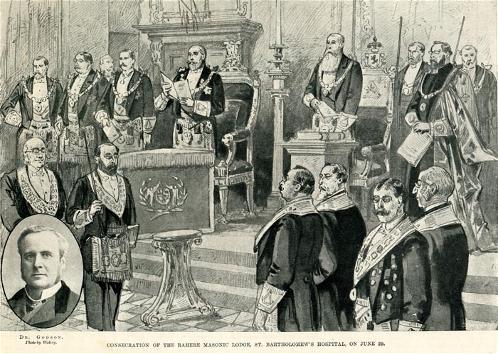 The following officers were appointed:

The first act of the new Lodge was to enrol the Prince of Wales as its first honorary member. When their Royal Highnesses departed, the guard of honour was provided by the St Bartholomew's Hospital Company of the Volunteer Medical Staff Corps.

Afterwards, the Brethren banqueted at the Albion on Aldersgate Street. The toast to "The Vistors" received its response from General Smith.

The Lodge takes its name from Prior Rahere, founder in 1123 of St Bartholomew's Hospital and the Priory Church of St Bartholomew the Great situated close by. An article in MQ Magazine describes some of the historical background.

Rahere was a courtier to Henry I. But struck with grief after the death of Prince William Adelin in the White Ship disaster of 1120, Rahere left the Royal Court on a pilgrimage in the hope of finding enlightenment. He arrived in Rome but, while staying on Tiber Island where St Bartholomew's relics were (and remain) held, he became ill with the ‘Roman Fever’ – possibly malaria. Fearful for his life, he made a vow to God that, in the event of his recovery, he would return to England and found a hospital for the poor. He did recover but on his return to England had a vision in which he was carried by a winged beast to the edge of a horrible abyss, into which he thought he was about to plunge. Crying out in terror, a figure appeared beside him ‘bearing royal majesty in his countenance, of wonderful beauty and imperial authority’ who identified himself as St Bartholomew and directed Rahere to found a church and hospital in his name at Smithfield. The Saint also told Rahere that he should have no doubt or anxiety at all concerning the expenses of this work, but should merely apply himself diligently to his appointed task.

With the patronage of the King and Bishop of London, the cost of the promised building work proved no problem and work commenced in the barren and muddy land known as Smoothfield, or Smithfield, the site of a gallows. Beside the effigy of Rahere on his tomb is a small figure of a kneeling monk reading words from Isaiah 51:3, “Consolabitur ergo Dominus Sion, et consolabitur omnes ruinas ejus; et ponat desertum ejus quasi delicias, et solitudinem ejus quasi hortum Domini” (For the Lord will comfort Zion; he will comfort all her waste places, and will make her wilderness like Eden, her desert like the garden of the Lord). It has been suggested that this refers to the new life brought to this desolate place by the building of the Priory Church and Hospital.

The construction of the church, to become part of an Augustinian monastery, and the Hospital, now the oldest active hospital in Britain, commenced in 1123.

In honour of Rahere and the Hospital he built, our Lodge bears his name, and our jewel his image. 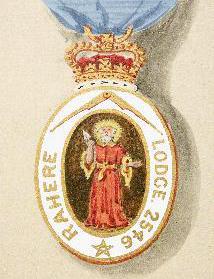 The design of the Rahere Lodge Jewel surmounted by the Royal Coronet, which members are permitted to wear at all meetings of Craft Masons (not just those of Rahere Lodge), was granted by HRH Prince Edward, Prince of Wales and MW Grand Master of the United Grand Lodge of England in 1897

In 2011 the Metropolitan Grand Lodge intiated a two year fundraising appeal for a £2.4m Cyberknife at St Bartholomew's Hospital, to which Rahere Lodge is contributing £10,000. The Barts Cyberknife is now fully operational, and saving lives.